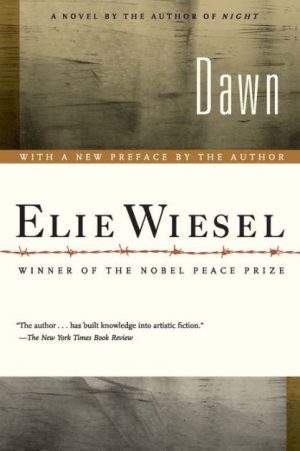 This is the second part of a three-part class.

EVERY CLASS CAN STAND ON ITS OWN; however, for a full year of ELA – please have your students register for EACH CLASS.  Please look on the website for the FULL YEAR of ELIE WIESEL classes at a substantial discount.

Elisha is a young Jewish man, a Holocaust survivor, and an Israeli freedom fighter in British-controlled Palestine; John Dawson is the captured English officer he will murder at dawn in retribution for the British execution of a fellow freedom fighter.

Caught between the manifold horrors of the past and the troubling dilemmas of the present, Elisha wrestles with guilt, ghosts, and ultimately God as he waits for the appointed hour and his act of assassination.

Dawn is an eloquent meditation on the compromises, justifications, and sacrifices that human beings make when they murder other human beings.

Elie Wiesel (1928-2016) is the author of more than fifty books, including Night, his harrowing account of his experiences in Nazi concentration camps. The book, first published in 1955, was selected for Oprah’s Book Club in 2006, and continues to be an important reminder of man’s capacity for inhumanity. Wiesel was Andrew W. Mellon Professor in the Humanities at Boston University, and lived with his family in New York City. He was awarded the Nobel Peace Prize in 1986.

This class is a MUST for every high school student.  The trilogy by Elie Wiesel is a “required read” of a well-read individual.

There must be a minimum of FIVE students to run this class.